I have been thinking about buying an electric bicycle but I wanted to ride one first. There is nothing like hands on experience to sort out pros and cons. Electric bikes are costly and I did not want to make an expensive mistake because of some fine print problem. You rarely see electric bikes in the UK, though I saw a lot when I was in Italy last year.

Parsley Hay is the site of an old railway station in Derbyshire's Peak District National Park. It is at the junction of two railway lines that have been converted to cycleways. The centre there has two electric bikes [and lots of other bikes] which they rent out. I hired one for £15.50 for four hours and set out down the Tissington Trail. 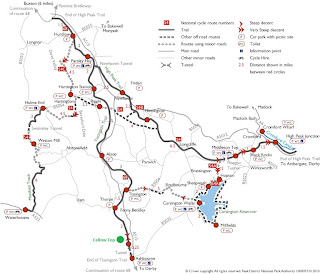 The bike was considerably heavier than an ordinary bike, but easy to ride. I covered about 24 miles with very little effort. It had three speed settings; eco, normal and sport. Even on normal I shot past puff and pant cyclists  and still had half the battery power left at the end of the ride. Most of the Trail is flat. On hills I found that part of the boost provided by the motor was cancelled out by the extra weight. Even so, hills were easier [but not effortless]. You have to peddle all the time, an electric bike is not a moped. 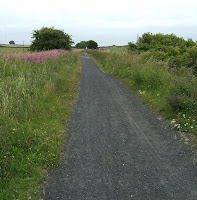 It was a nice day out but I do not think I will be buying an electric bike just yet.

One issue is weight. This is not a problem when riding, but an electric bike would be difficult to transport. I would not like to have to lift one on and off a bike rack. I would also have to lift one up several steps to get it in my house. If the frame could be lightened [perhaps by replacing metal frames by bamboo [see this BBC video] and the battery pack made easier to remove that might help.

Battery power is another, though much less important, issue. This might be easily solved by making it easy to add a second power pack when required.

The final issue is cost. There are several manufacturers but none has managed to achieve economies of scale. When the Henry Ford of electric bikes appears prices should fall a lot.

These are quite popular in NYC with Bicycle Messengers and Delivery people... When I get on a bike, I personally prefer to rely on pedal power...

I suppose that's the problem - a lot of people will be buying bikes
for the exercise, so don't really have the incentive to buy something
that takes less effort, is heavier to lug around, has more bits to go
wrong and is more expensive.

So maybe this is one reason why it hasn't gone into major mass production.

Tho they might have more of an incentive if they all lived at the
bottom of a valley surrounded by steep hills to get anywhere.

You'd have thought there might be at least a reasonable market for it
on a global scale though. If companies are making them at all, then you'd have thought that sooner or later they would make them better.
May well be that other companies do make better lighter models. After
all, if you rent out an ordinary bike from somewhere you do tend to
get a more basic heavily built model purely because they're designed for lots of wear and tear.

Always good to try before you buy, especially with something
expensive, mechanical, or that involves sitting on it (due to comfort
issues).