Twelve books that changed the world 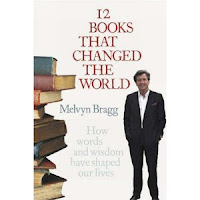 On the 26th October 1863 a group of public school men met in The Freemasons Tavern in London to draw up a set of rules for football. They all came from different public schools and all played a different version of football. At that time there was no agreed set of rules or governing body.

How they played was influence by their school. Charterhouse School was housed in the confined space of an old Carthusian monastery and their style favoured 'dribbling'. The vast playing fields of Eton favoured long and high kicking. Some public schools had a muscular ethos and favoured a game that encouraged aggression. Some schools allowed ball handling, to others it was anathema.
These public school boys wrote the Football Association Laws of 1863. This created a standard came that spread around the world. Some chaps could not give up ball handling and left to create rugby football. So were two of the world's great games created.
The Rule Book of Association Football is one of Melvyn Bragg's twelve books. Others include On the Origin of Species by Charles Darwin, the Patent Specification for Arkwright's Machine and Experimental Researches in Electricity by Michael Faraday. It is an eclectic selection.
Until I read the chapter on Shakespeare's First Folio I had not realised how close we came to loosing much of Shakespeare's work.
There is a chapter on the King James Bible; for centuries the best selling book in the English language. This was written by a group of scholars appointed by the king and the book was written to be instrument of social control. No disloyal sentiments were allowed. No uncomfortable thoughts were encouraged. The supremacy of the Crown and loyalty to the king were emphasised.

This was important stuff in a time when the Bible was the only book many people possessed, or had read to them. So important that people were pressured to attend special buildings [aka churches] to have the official word preached to them by religious commissars [aka vicars]. The Church of England is still a state controlled religion and its bishops have to be approved by the Prime Minister before they can be appointed.
Much of the content of the King James Bible was taken from William Tyndale's bible, including much of the beautiful phraseology. Henry VIII knew how important bibles were in encouraging or suppressing social unrest. He didn't care for Tyndale's bible and had him hunted down and strangled.
The reviewers on Amazon don't like Bragg's book. Tough shit, I like it a lot and recommend it to you.
BTW - Melvyn Bragg presents the BBC's In Our Time radio programme in which three experts [a different group for each episode] discuss a topic. Recent topics have included the Industrial Revolution, Thomas Edison and the History of the Antarctic. The programmes are available as podcasts and there is an archive of past programmes. This latter is easily the world's greatest archive of the knowledgeable spoken word.