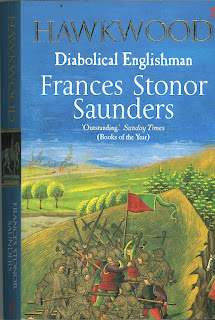 John Hawkwood was a 14th century English mercenary who fought in the Hundred Years War and then became a condottiere in Italy. He rose to command the famous White Company. He and his band fought for Popes, Kings, Tyrants and various Italian cities in a time when Italy was divided into city states who were constantly at war with each other and the Pope.

The condottiere may have been criminals but the Roman Catholic Church was little better.  Hawkwood served some Popes who were little more than murderous lunatics. Hawkwood was involved in the Massacre of Cesena on the orders of of Robert, Cardinal of Geneva, (later antipope Clement VII): the Cardinal acting as the legate of Pope Gregory XI.

Ms Saunders hangs her story on Hawkwood, but the book is really about Italy in one of the most turbulent periods of its history.

Ms Saunders writes well and her book provides a fascinating picture of Hawkwood and his time. I recommend it if you enjoy reading history.