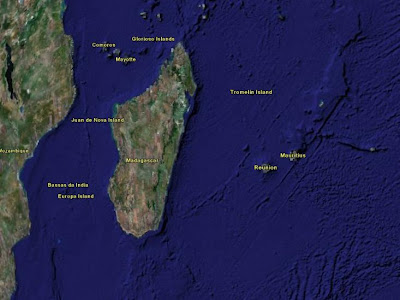 During the Napoleonic Wars the French occupied the Indian Ocean islands of Mauritius and Reunion and used them as bases to harass East India Company ships carrying cargo and passengers between the British bases in India and the UK.

French privateers and fast naval frigates intercepted East Indiamen as they travelled across the Indian Ocean. The British tried to stop this; first by sending a naval squadron, then by invading both islands. The military advantage swung from one side to the other during a remarkable series of naval battles. At the Battle of Grand Port the French virtually annihilated a British squadron. Incidentally, this was Napoleons only naval victory over the British.

It was a fascinating campaign, and I first heard about it when I read ‘The Mauritius Command’ by Patrick O’Brian. This was the fifth book in O’Brian’s marvellous series of Aubrey and Maturin books, and one of my favourites. If you have never read any of the twenty plus books in this series then you have a treat in store, though I would start with the first book in the series ‘Master and Commander’, rather than The ‘Mauritius Command’. 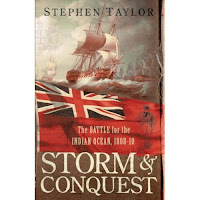 Taylor’s ‘Storm and Conquest’ is an historical account of events in the Indian Ocean in 1808-1810. The first half of the book is about the British in India and the loss in hurricanes of two East Indiamen convoys in 1808-9. These events are very well, recounted and there are some terrible stories. The journey home from India would have been a very boring and uncomfortable experience even at the best of times. For the people on the 1808 and 1809 conveys it must have been hellish. The story of Emilia Scott who survived two shipwrecks, only to die on one of the convoys is particularly sad.

The second half of the book covers the military campaigns to destroy the French squadron and capture Mauritius and Reunion. The events covered will be very familiar to anybody who has read O’Brian’s book. Many of the same names appear in both books. For example, the real Captain Corbet and Admiral Bertie appear to have been very like the way they were portrayed in O’Brian’s book.

There was a Jack Aubrey figure and his name was Captain Josias Rowley. Like Aubrey’s character he was Commodore of the British East India squadron and a marvellous seaman and leader. No Maturin figure appears in Taylor’s account but from some of the events one suspects there was such a person at work undermining the French will to resist. 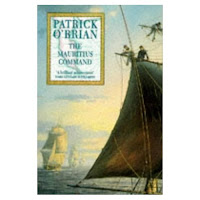 If these books sound interesting my advice would be to start with Taylor’s book, and then read ‘The Mauritius Command’.