In January 2006 National Geographic published an article on mass murders of civilians by governments in the 20th century. The article included a list of the major killings analysed by the state responsible for the deaths. The total came to almost 91 million deaths.

The figures only cover the killings of civilians. Military deaths were not included. Some of the killings were targeted against specific political, religious and ethnic groups. Others were caused by sheer brutality, or as a result of military campaigns. 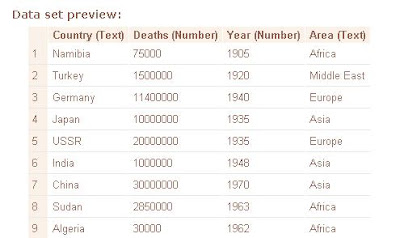 I took the National Geographic data and entered it into the excellent Many Eyes. This is IBM's online data visualisation tool. The result was these two charts. 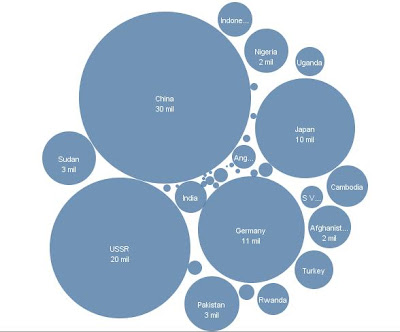 Though China has the greatest number of deaths, if the data is analysed by region we can see the worst killing fields were in Europe. 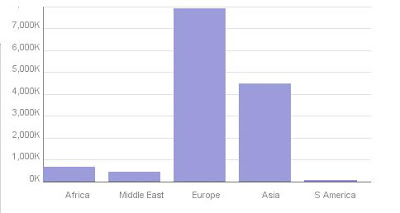 I take two things from this. The first is what a blood soaked century the 20th century was, especially in Europe. The second is that we should be fearful, not of terrorists, or drug dealers or any of the other bogeymen governments dangle before us to increase their powers, but of governments themselves. They are the ones we should fear.