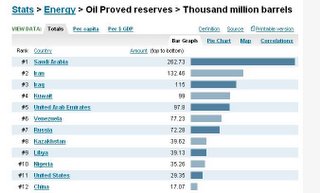 You can also see that the two countries with the largest thirsts for oil, the USA and China are low down the list. That suggests that to get the oil they want they need to get de facto control of a weaker country with large reserves. China has done some very large energy deals with Iran to help secure its supply. These deals are the reason why Bush's threats on attacking Iran are just bluster. The Chinese would never allow an attack. How could they stop one? That would be simple. China has very large reserves of US dollars. If these were dumped on the market it would be goodbye to the dollar.

The world still generates about 50% of its electricity from coal. The picture on coal is as shown below. 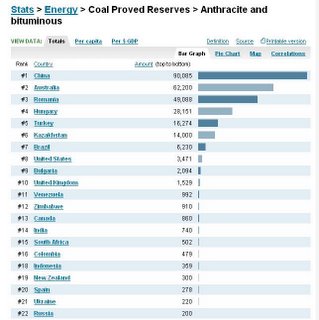 The table only shows the reserves of high quality coal. Reserves of brown coal [lignite] are not included. Both China and the EU appear to be well provided with coal. America's reserves are much smaller, but are still sufficient for its needs for many years yet. Brown coal is usually burned by power stations. This article from the New Yorker describes what is involved in getting the coal to the power stations. The author rode a 19,000 ton coal train from a mine to a power station. The coal on the train supplied the power station for about eight hours.

Russia is the 800lb gorilla in natural gas reserves, as can be seen below.

Until recently Russia was always seen as a dependable gas supplier to Europe. Recently they have been showing their European customers that they see gas as a political weapon. It remains to see if that is a clever strategy. What it will mean is that the focus of attention for many European countries is likely to switch from the exhausted and bankrupt USA to the far more crucial energy rich Russia.