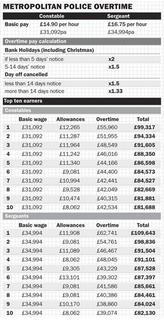 "SOME police officers are earning up to £100,000 a year, triple their basic salary, by putting in thousands of hours in overtime.

The figures, obtained under the Freedom of Information Act, will alarm London police regulators and reformers within Scotland Yard who are examining wideranging changes in the Met’s operations.

Email ThisBlogThis!Share to TwitterShare to FacebookShare to Pinterest
Labels: police

These inflated wages figure into computing their pensions. And so, cops are retiring in droves at this peak salary, with their hefty inflated pensions.

Don't know your arrangement in the UK regarding pensions...

The UK police can retire after 20 years on an inflation adjusted pension of two thirds final salary. i dont know if overtime is taken into account. the cost to the taxpayer is huge. no other occupation has benefits like the police.