The First Day on the Somme


The Battle of the Somme started on the 1st July 1916, and that day was the worst day in the history of the British Empire. By the end of the day we had suffered 57,470 casualties, of whome 19,240 were killed or later died of their wounds.

Many of the dead and wounded were members of Pals Battalions, volunteer units raised from particular areas or organisations. The Glasgow Tramways raised a Pals battalion. Covenant with Death by John Harris tells the story of the Sheffield City Battalion which was wiped out in an attack on the village of Serre. When these Pals Battalions suffered heavy losses it had a particularly terrible effect back home, when half the houses in a single street might receive a War Office telegram on the same day.

Nothing was quite the same in England after that day. Martin Middlebrooks The First Day on the Somme was written in 1971 and contains many accounts from men who took part in the attack.

Two years ago I drove through the Somme and you can see how far the various units got from the positions of the cemeteries. 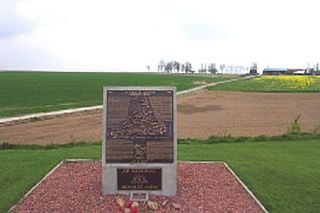 I came upon this plaque outside Mouquet Farm. Later in the battle the Australians tried to take the farm and lost 10,000 men [plus another 15,000 against the nearby village of Pozieres]. The farm is nothing, just a few buildings on a slight rise, but the Germans were well dug in and so all those fine young men were lost. The Anzacs lost more people at Mouquet Farm and Pozieres than they did at Gallipoli.

About ten years ago I drove up to Ballarat, the gold mining town, in Australia. On all the roads leading into town they had planted trees to commemorate the local boys who had been killed in the Great War. Each tree had a little plaque giving the name of the casualty. There were an awful lot of trees and they really brought home the losses that had been suffered by even small and distant places like Ballarat.

It was battles like the Somme that made politicians so reluctant to confront Hitler and so led to WW2. That experience in turn has lead to the great experiment of the European Union. The EU is not about single currencies and trading agreements, but about not having any more days like the 1st July 1916.

When the Europhobes rant on about the EU they need to remember why it was started.