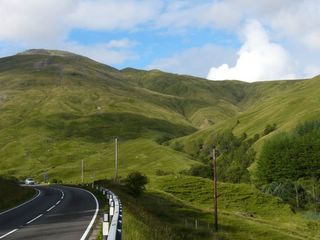 This is the picture most tourists have of the Scottish countryside. They find it beautiful, but that is because they do not understand what they are seeing.

What they are seeing is a devastated industrial landscape. The bare hills and glens of Scotland are a product of the sheep farming and the sporting industries. Approximately 98% of the natural Scottish forests have been cleared. Neolithic farmers started the tree felling and it has continued to the present day. The bare green hills are now only good for sheep, deer and grouse. There are too many deer in Scotland and deer are very good at preventing forests from regenerating. If neither the sheep farming or shooting industries existed the countryside would look very different.

Sheep farming is not economically viable. Without subsidies farmers would be losing money on every animal they raised. Sporting estates are not much better. When I drive up to Edinburgh I pass through mile after mile of this industrial landscape. A landscape that is full of sheep farms that provide only a subsistence living to their owners.

What needs to happen is for the Scottish Parliament to introduce a scheme to persuade landowners to move away from sheep and grouse farming, and to start reforestation. To start replanting the Great Caledonian Forest that once covered Scotland. Once the forest started to regenerate we could start looking at reintroducing some of the species that have been lost.

A small step towards making this happen is being taken around Loch Katrine with a scheme to plant thousands of acres with broadleaf trees, such as oak, rowan, alder, willow, ash, and aspen. There is so must wasted land in Scotland that we could create a forest covering thousands of square miles. This would not only be a recreational asset for Scots, but also a tourist attraction. It would also do something towards alleviating global warming.