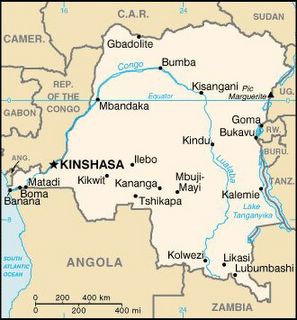 I am currently reading Michela Wrong’s ‘In The Footsteps of Mr Kurtz’. This excellent book is about Mobutu Sese Seko’s regime in the Congo. Wrong describes this as being a kleptocracy, which means a government by thieves. I looked up the full definition in Wikipedia which gives a number of examples of such states; including Indonesia under Suharto, Peru under Alberto Fujimori, the Federal Republic of Yugoslavia under Slobodan Milosevic and Romania under Nicolae Ceausescu.

Following the links in the Wikipedia article lead to Raubwirtschaft, which means a plunder economy, and is a term for a form of colonialism where the goal is purely the plunder of the wealth and resources of a colony with no pretence of "civilizing" or aiding the native inhabitants. The Congo under King Leopold II of Belgium is the foremost example of such a state. This story is largely forgotten now, fortunately for the reputation of the Belgians.

From 1885 to 1908 the Congo was the personal property of King Leopold who maimed and murdered the inhabitants in his attempt to extract as much wealth as he could from the country. About ten million people died in this forgotten holocaust and many others had their arms or legs chopped off.

Australia is often called the lucky country but many others, including the USA and the UK, have been very fortunate in their history and geography. If there are lucky countries, there are also unlucky ones, and the Congo must be the unluckiest. After Leopold and Mobuto there has been a succession of wars. It has been estimated that 3.8 million people died in the Second Congo War [1998-2002]. Whenever we are tempted to moan about some aspects of life in our own countries it is worth remembering the awful lot of people who have had the misfortune to have been born in countries like the Congo.